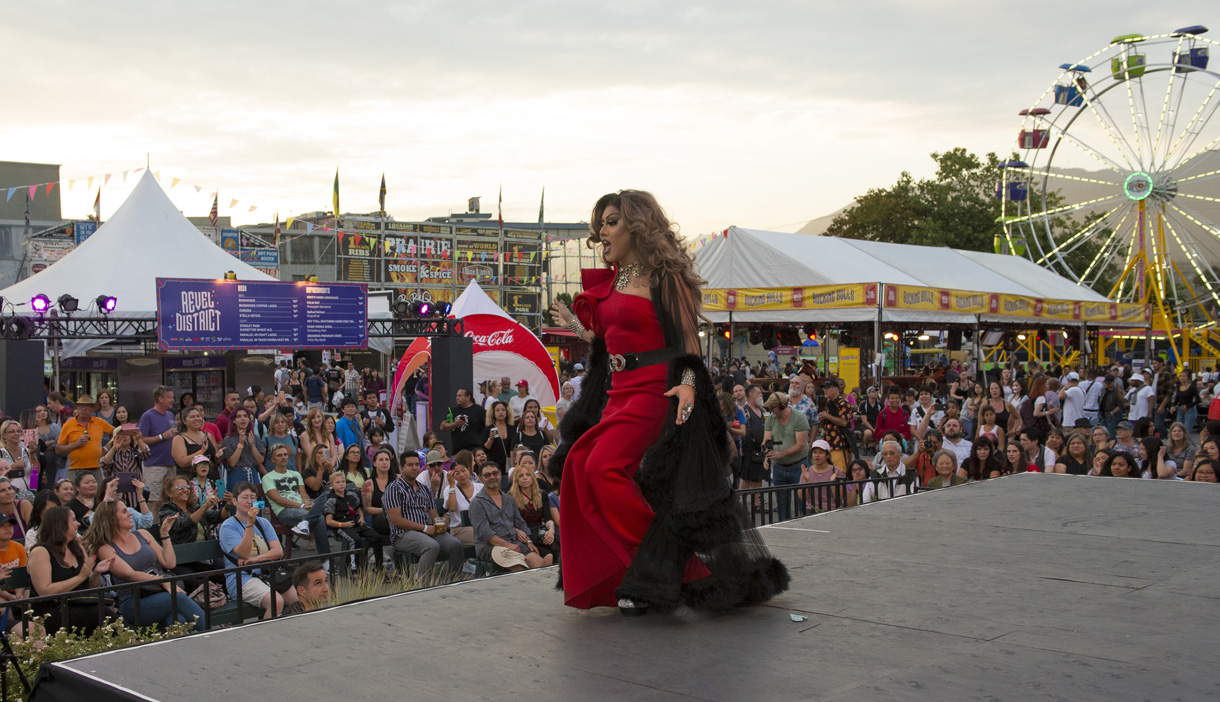 Get ready to revel in fun, food and fantastic shows at the PNE Fair’s entertainment zone!

With multiple bar locations and tasty barbecue food smoked over a traditional open charcoal pit by BBQ pit masters, there are many reasons not to miss out.

For the Love of Drag

Feast your eyes on the fierce performances of some of Vancouver’s drag superstars! Tuck Entertainment presents a menagerie of drag queens nightly on-stage serving outrageous looks and breathtaking performances to some of your favourite pop songs. If you’ve never been to a drag show before, “For the Love of Drag” is the perfect chance to indulge your wild side!

A legend in the tribute community, Bobby Bruce’s Nearly Neil journey began in 1994. An actor and singer from Vancouver, Bruce was a new transplant into the Toronto entertainment scene when he was convinced by an Elvis impersonator to join a local multi-tribute show. Within a year Bruce was being scouted by Las Vegas’ Legends in Concert. He joined them for a 10-month engagement in the US with appearances stretching from Nevada to Branson to Atlantic City.

International engagements came calling, Bruce’s first national tour of Australia with another Legends-style show saw 60 shows in 10 weeks across the continent, earning him his moniker. Directly from Australia, the tour went on to Malaysia where Bruce had the honour of performing for the King and Queen. The Australasian connection continues today with dozens of tours visiting Borneo, Singapore as well as elite venues across Malaysia, national tours of New Zealand and annual Australian tours that have taken him to every state and territory.

Using his international touring as a launch pad, Bruce broke away from the “Legends” type shows and formed Nearly Neil and the Solitary Band in Vancouver of 1997 quickly becoming a staple in the Canadian market. The Solitary Band have embarked on national tours of the USA and Canada, repeat tours to the Cayman Islands, Holland and Belgium, performed at exclusive private events for a handful of people to outdoor public concerts to 20,000.

Over twenty-five years into his Nearly Neil journey, Bruce, now lives on Gambier Island in the Howe Sound with his wife. A few years ago they found themselves in Italy for a private performance that gained them the opportunity to meet Andrea Bocelli.  We are excited to have Nearly Neil back at the PNE again, always a fan favourite!

ABRA Cadabra – A Tribute to the Music of ABBA

ABRA Cadabra has been touring the world for almost 20 years helping audiences of all ages & cultures re-live and celebrate the timeless and uplifting music of ABBA! This high-energy and captivating stage show takes you on a nostalgic journey through all of your favourite ABBA hits including Mamma Mia, Dancing Queen, Take A Chance On Me, Waterloo, Does Your Mother Know, Gimme Gimme Gimme, Fernando, SOS, Super Trooper and many more!

As fans of the music themselves, ABRA Cadabra prefers to not impersonate the original members of ABBA but instead recreate the amazing music and legacy of the Swedish Super Group with powerful vocals, musicians, dancers, costumes, audience interaction and lots of stories about ABBA.

The cast has had the honour of traveling to many corners of the world performing shows for the Prime Minister of Malaysia, the Malaysian Royal Family, the Buddhist Society, Tatler Magazine, International Shoe Designer Jimmy Choo, a live televised concert for 20,000 people at the Penang Fair in Malaysia, The Esplanade Theatre in Singapore, The Genting Highlands Casino in Malaysia, an opening spot for Kool & The Gang at Universal Studios in Orlando Florida, The Auditorio Luiz Elisondo and Woodstock Plaza in Monterrey, Mexico, The Star Pass Resort in Tucson AZ and the Point Park Concert Series in Parkersburg, West Virginia. Within BC they have performed at the Queen Elizabeth Theatre (opening for Boney M), The Hard Rock Casino Show Theatre, The River Rock Show Theatre, The Pacific National Exhibition, The Commodore Ballroom, The Vogue, The Harmony Arts Festival, The Kelowna Community Theatre, The Massey Theatre in New West, The Vernon Performing Arts Centre, The Port Theatre in Nanaimo, The Chilliwack Cultural Centre, The Mary Winspear Centre in Sidney and many other festivals, Casinos, Theatres and Corporate events throughout BC.

For over a quarter century, The Paperboys have been touring the world and lighting up stages with their free-wheeling blend of influences from Celtic and bluegrass, to Mexican son jarocho, brass bands, and Canadian roots. They’ve been called everything from Cajun slamgrass to worldbeat, they’ve received a Juno award (Canadian Grammy), plus two Juno nominations, released nine albums, and regularly play two-night bills in the Pacific Northwest.

The current lineup of The Paperboys features: Tom Landa on vocals, guitar and jarana (Mexican guitar), original member Geoffrey Kelly on flute/whistles (Geoffrey is also a founding member of Spirit of The West), Kalissa Landa (yes, her and Tom are married) on fiddle/vocals, Brad Gillard on bass/banjo, drummer Sam Esecson, and trombonist Nick La Riviere.

In 2018, for their 25th anniversary the band released a brand-new CD and continue to bring their adventurous vision of Canadian roots music to festivals, dance halls and theatres everywhere, spreading good cheer and great music.

The March Hare Beach Party is Fun Fun Fun in the Sun. Sand, surf, and sun makes it a Hot Hot Hot celebration!

Bring your sunscreen and we’ll go Walking On Sunshine through Margarittaville with some California Girls. Everyone loves summer music so let’s do some Dancing In The Streets as we Soak Up The Sun and go Surfin’ USA. You might even Wipe Out while you’re doing The Twist at the March Hare Band Beach Party!

The R&B Allstars are a dynamic 10-piece rhythm and blues band, celebrating their 41st year on the Vancouver music scene. Formed in 1979, the band gained popularity playing venues such as the iconic Town Pump, the Commodore, Richards on Richards, 86th Street as well as being a regular feature at Whistler’s Buffalo Bills. The band enjoyed great radio support in the early years having recorded many singles and a live album, Live at the Five, which is where it all started. More recently the band recorded a CD/DVD set at the Hard Rock Casino.

The Allstars always enjoy reconnecting with their loyal fans of many years and finding new ones along the way.

Vancouver party band Groove & Tonic deliver a high energy performance of R&B, Disco, Funk, Rock and Pop with a repertoire both old school and contemporary. Always engaging, always professional, these musicians showcase their top-notch musicality and infallible grooves. This band makes people get up and dance!

Known as “Vancouver’s house-band” after 14 years at The Roxy, first call band to the Canucks and the ability to play at any event big or small, Dr. Strangelove always makes you feel like you are part of the show. Dr. Strangelove is a highly entertaining, high energy and extremely versatile dance band with 5 talented lead vocalists who can cover everything from Frank Sinatra to Lady Gaga to ACDC. One of the few bands in the city who can confidently take requests all night long, while keeping the dance floor packed, people engaged…and all with a sense of humour!

​With many years of experience, this band of friends continues to light up the stages of Vancouver and beyond as the city’s musical ambassadors.

The Hitsville Band is a hard driving revue that truly captures the sharp wardrobe, polished style and the soulful sounds of the Motown artists who transformed rhythm and blues music.

Mike Henry began is professional career in Las Vegas in the 80’s and has performed at numerous major resorts and casinos including Bally’s Park Place (Atlantic City), Trump Castle (Reno/Tahoe) and the MGM Grand (Vegas). He has toured internationally aboard both the Viking and Color Cruise Lines in addition to performances in Taiwan, Hong Kong, Bangkok and Dubai. Mike is leader of a variety of other projects including his Ray Charles/James Brown tribute show and a variety of R&B, Funk and Reggae bands including Mostly Marley.

Krystle Dos Santos has taken her experience from the Canadian College of Performing Arts and transformed it into the beginnings of a career already full of achievements. Since her 2008 recording debut, Krystle is recognized as a force by the Western Canadian Music Awards. With key performances at the Edmonton International Jazz Festival, Whistler International Film Festival, and the Honey Jam Showcase in Toronto, Krystle has had many opportunities to put her live shows on full display.

When an audience encounters the high energy performance of Soulstream, they wonder how they so easily exceeded their Fitbit goals. With 2 lead singers captivating the crowd, the sweet ‘n’ powerful sound of a 3-piece horn section, and the freight train of rhythm pumping from the band, you will: “Get up offa That Thing”, dance, and feel better! Soulstream offers up a mix of feel-good 70’s Soul, 60’s Motown, Hip Hop, current Pop, and a dose of Classic Rock, which always has crowds singing along.

If your event includes more adventurous listeners, Soulstream excels in many genres, such as Funky Jazz like Herbie Hancock, Latin, Big Band, and more. With a collection of musicians who share numerous Juno’s and Grammy’s amongst them, Soulstream brings a high level of quality and integrity to your event, and leaves audiences wanting to turn back time to get more out of their evening.